The Burlington Downtown Business Association is celebrating 40 years of memories!

From November 15 – December 15th, 2020 we invited all residents and business owners to join us for a walk down memory lane for a chance to make even more memories with one of 3 grand-prize overnight visits to our beautiful downtown core. View full contest here. 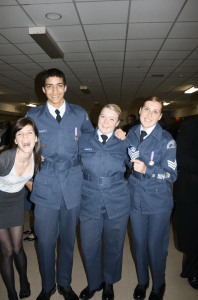 I have grown up in Burlington since 1995 at the age of 2 and have been raised by its community. I consider it to be the main reason I am the kind, supportive, and generous member of society I am today. The Burlington community has taught me to hold doors open for others, and always say please and thank you, to let people merge into traffic in front of me, and to never yell at a restaurant or store employee because they’re just doing their job. While these things should be considered common courtesy, they are much more common to see from the citizens of Burlington.

I have so many wonderful memories of downtown Burlington. Years of attending and volunteering at the Sound of Music Festival and Ribfest. Years of fireworks in Spencer Smith Park on Canada Day and walking the Christmas lights after the first snowfall. Celebrating birthdays and grabbing a drink to catch up with old friends, first dates and heartbreaks, ghost walks through Village Square, and seeing how the downtown core has evolved and changed over the years into the wonderful community it is today. Although, some of my most cherished memories are with the 715 Mohawk Air Cadets.

I have been with the 715 Mohawk Air Cadets in Burlington for 13 years now. I joined as a teenager in September of 2007, worked through the ranks to WO2, and ‘retired’ from the program in June 2012. I wasn’t ready to leave yet and decided I had gained so much from the program in the past 5 years, I needed to give at least 5 years back. In September 2012 I returned as a civilian volunteer and continued teaching the next generation what I had learned, all while continuing to grow my skills as an adult. In March 2019 I was sworn into the CIC as an Officer Cadet, expanding the opportunities and resources available to me to help guide the next generations of Air Cadets in Canada.

One of the aims of the Air Cadet program is to promote citizenship in our youth and the 715 Mohawk Air Cadets have participated in countless events throughout the city. I have personally participated in 10 Santa Claus Parades, 12 Remembrance Day Parades, done visits at retirement homes around the holidays, assisted with many marathons including the Chili Half Marathon, served at veteran dinners, worked with the Legion during the Poppy campaign and many other Legion events, done highway cleanups and so much more.

My favourite memories are definitely from the years of Remembrance Day vigils at City Hall. It’s one of the few times of the year that the Air Cadets, Army Cadets, and Sea Cadets of Burlington get to work together. Cadets stay overnight and work in 1 hour shifts from 5pm on November 10th until the end of the parade on November 11th to guard the Vigil outside City Hall. It’s a night that year after year has taught me hard work, sacrifice, and respect, all the while getting to have some fun with my friends. While cadets are working hard, the staff always worked hard to provide fun activities from movies to video games, to working on our uniforms together as a team. Once I became the adult in the situation, it was so great to be able to plan it and see how happy it makes the cadets. One year we were unable to sleep over at our usual location and actually got to spend the night inside City Hall! The Mayor dropped in to say hello and the cadets were so excited to get to meet our Mayor.  The vigil was one night of the year I always looked forward to because I knew I was going to have some fun and because it always felt like we were doing something so important.

I recently learned that this isn’t something that every cadet corps/squadron gets to do. Many cities don’t allow it. So, I’d like to say thank you to the City of Burlington for not only allowing but always encouraging our cadets to participate in so many events like the Vigil. We sometimes get a lot of comments about ‘annoying kids’ but getting our youth out into the community really is an important part of guiding the next generation in a positive direction. It has brought me 13 years of wonderful memories in this city with many more to come. I couldn’t ask for a better, more supportive community to do it in.